2. Water music suite: Air
G.F. Handel
Traditionally played at weddings - not sure why!

3. Christ is made the sure foundation (hymn)
Henry Purcell
Sung by all major denominations (Catholic, Anglican,Methodist) This is the music that Pope Benedict processed to when visiting Westminster Abbey in 2000. A major ecumenical occasion on 21 Sept 2010 - worth watching on YouTube at:
https://www.youtube.com/watch?v=cR9NHXnbxlU

4. Jesu Joy of Man's Desiring
J. S. Bach
A particular favourite which was sung for us by a friend who was a trainee opera singer (Austin Huchison)
in 1967 - and performed again on the trumpet (Clive Skinner) at our 50th celebrations in 2017

6. Toccata and Fugue
J. S. Bach
Of course! Joyous, dramatic and emotional to process down the church at the end of the ceremony.

How do we remember all of this after 50 years?

By an extraordinary act of good fortune, the original organist's notes (on a sheet of lined paper) fell out of our wedding album when we digitised the photos in 2017 and, thanks to the Internet, we have managed to match up recordings that very closely approximate to the original renditions in 1967.

You can access individual photos/music tracks via the following link:
http://wedding.mch-net.info 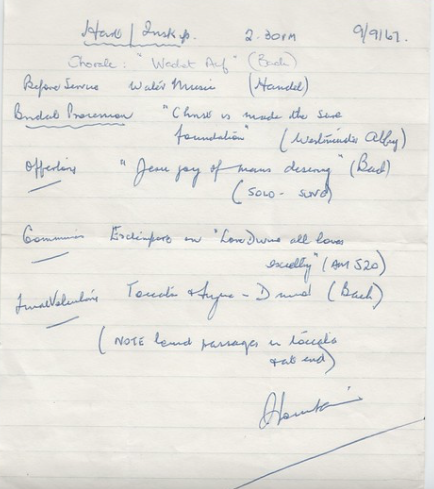